It’s strange how you can not see someone for years and then miss them so much when you realise you will never see them again.
You also realise how little you really knew them. I know so little about him. I know he was a Veteran of WWII, where he was a Ships Gunner in the Navy; I know he did a fantastic job raising my Mother; I know he was a wonderful, kind and caring man.

But I never really knew him as a person. I guess most people feel like that when they loose a Grandparent. Grandparents are the kindly old people who would always give you sweets or a pound when you were a kid. You tend to see them less as you get older, which you justify to yourself with excuses.

Then one day they’re gone.

My Granddad was 92 years old. He was born in 1918, when you still had to hand wind most cars before you could start it, and before television. I wish I had just taken some time to talk to him about what it was like to see the 20th century unfold, what his life was like, the details, the stories.

When I was about 10 years old, I did a project on WWII for school. I interviewed my Granddad and did the project around him. He told me stories about his time in the Navy, what it was like living on the ships, what it was like being a Gunner. He showed me his medals and even let me take them into school. I was like Gollum with The Precious. I wouldn’t let them out of my sight. Now I’d just like to hold them again and remember being a 10 year old boy, sat on the floor with a tape recorder. On that day, he became a hero to me and it’s only now I realise it.

That project was thrown away, along with all my other old school books and things, when I moved out of my Parent’s house. I got an A for that project. It was probably the best bit of school work I ever did. I even got a certificate.

Today I’m saying goodbye to my Granddad. I just wish I could tell him he’s a hero and shake his hand one more time. 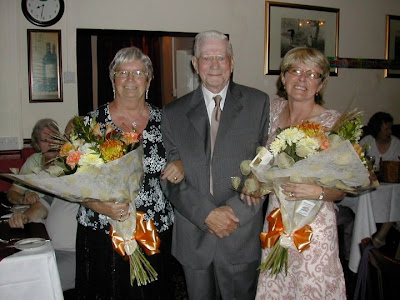