I’ve mentioned before that I’m quite OCD. This means that little things in every day life really, really annoy me and I have to put them right whilst cursing the person who has done it wrong.

One of the things that drives me up the wall in my day to day life is Cutlery, or more specifically, the way cutlery is placed in a drainer.

After you wash cutlery, you put it in a drainer so it can dry before you put it away. Now, the correct way to do this is business end up, as in the eating end pointing upwards.
This is important for two reasons: First of all, unless you wash your drainer a lot, the bottom of it probably isn’t the cleanest place in the world. Secondly, and more importantly, if you put the cutlery in eating end down then the water is all running down towards it, rather than away from it, and this often means it can’t drain properly and you end up with water marks and soapy residue all over the bit you’re gonna be using to put your food in your mouth. It’s like washing a glass and putting it on the drainer the right way up so all the soapy water collects in the bottom. It’s fucking stupid!

I would think that all this is pretty basic common sense, and I know it is common practice in the trade from some really shitty catering jobs I did once when I worked for an agency (which is another story altogether).

So why is it that so many people seem to be totally oblivious to this very basic premise? Why do people put the cutlery in handle up? Why?

In the kitchen at my work the cutlery is constantly the wrong way up in the drainer which means that, every time I go in the kitchen, I have to turn it all the right way up. Seriously, I cannot walk past a drainer with the cutlery the wrong way up without fixing it. This may seem like a small and stupid thing but when you’re kinda OCD and it happens all the fucking time, it becomes pretty damn tiresome.

So I have made this handy chart (starring the drainer at work) for people to refer to if they forget which way up the cutlery goes. 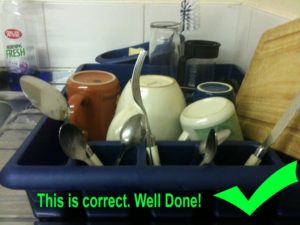 2 thoughts on “On Cutlery”