On Health and Safety

One day Common Sense was walking down the road, minding his own business, maybe thinking about what he was going to have for dinner when WHAM! He’s down and bleeding, head split open from ear to ear. He rolls onto his back and looks into the face of his assailants and there, standing over him, is Health and Safety. Then it all goes black. 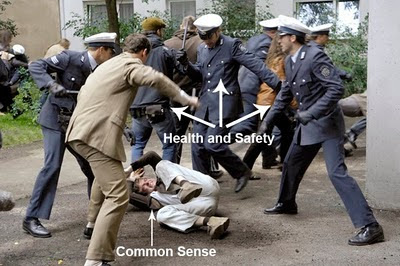 Health and Safety is like Morphine: A little bit can take your pain away but a lot will ruin your life.
I absolutely despise Health and Safety. In the half a century I have been alive, I have watched it grow from a Common Sense based practice to an exercise in utter lunacy.
Thanks to Health and Safety people can’t do their jobs effectively. Bin men aren’t allowed to handle rubbish; Window Cleaners are often not allowed to use ladders; TV Aerial fitters aren’t allowed on roofs. It’s fucking stupid. And who’s fault is it? America, that’s who. Their culture of Sue, sue some more, ask some questions and then sue again has come over to the UK and utterly buggered the place.

I think it’s worst for kids. Sure, our insurance premiums are all sky high and a lot of us have difficulty performing our jobs, but Health and Safety wants to suck all the fun out of childhood.
I’ve heard cases of schools where children aren’t allowed to run in the playground, in case they fall over. Seriously! How fucked is that? A lot of schools have had to rip out play areas because a kid has fallen and hurt themselves (like kids do) and the parents have sued.
When I was a kid, if you fell you got the fuck up and carried on. If it was bad, you went to the school office and, depending on the situation, they either gave you a plaster or called an ambulance. Now, most schools aren’t allowed to give out things as simple as plasters anymore because 1 in a million people might be allergic or some such shit. It’s fucking stupid. Many schools have banned Football and other ball games, deeming them hazardous. What are kids supposed to do now? Stand still in the yard and talk quietly?

When I was a kid we would spend our break times running around, playing football, chasing each other; generally having fun. I remember a few injuries, but not many! Me and my friends used to play full contact roller hockey in a school playground with almost no padding and we never had one serious injury. Not one. I spent most of my childhood either on a mountain bike, jumping over whatever I could find, or on inline skates; on the street and in skate parks. I saw many a broken wrist or ankle in the skate parks (though I never had one myself) and, nearly every time, I would see the skater back again, often still in a cast, as soon as was possible. What does a broken wrist really matter, in the long run?

But it isn’t even about that, is it. It’s nothing to do with the health and welfare of the child. That’s the bit that annoys me the most. No-one actually gives the faintest fuck about someone getting hurt: They just don’t want to get sued.

Judges need to wake the fuck up and stop awarding claims to idiots who fall over because they haven’t the sense to look where they’re going. It’s not the Council’s fault that you can’t walk down a pavement without falling on your face. That’s your fault.
It’s not the schools fault if your kid falls over in the playground. That’s just what happens to kids. They’ll be fine.
It’s not your employers fault that sometimes floors need to be cleaned and this makes them slippy. Look where you’re fucking going.

The system is there to help people who are the victims of others being idiots. It’s fair enough to make a claim against someone who rear-ends you at a traffic light because they were adjusting their eye make up or if a builder chucks something from a scaffold and it breaks your skull.

The problem is, of course, that the system gets abused: people make claims they shouldn’t make and they win! It costs UK governments about £800 million per year and we cannot afford to spare that sort of money!
The bulk of these claims are from people tripping on pavements that have cracked or become uneven, the irony of course being that the councils can’t afford to fix them because of all the claims being made.

Look, I have fallen over many, many times in my life. I’m fallen over pavements, fallen off walls, fallen on my face whilst skating, and I have never sued anyone. I think ambulance chasing lawyers are parasites. They encourage people to sue over stupid things that are their own fault. The adverts drive me up the fucking wall, as well. They’re so ubiquitous; you can’t get away from them. TV adverts, radio adverts, billboards, posters; Accident and Emergency departments are strewn with posters and pamphlets for them. It makes me sick. They may as well have some greasy lawyer going around whispering to everyone like Grima fucking Wormtongue.

As a song once said: What the fuck am I working for? Just fall over in railway station and climb 2 mil in compensation.

If we all used our common sense and admitted to our mistakes the world would be a better place. We’d all save money on our insurance and we’d be able to do away with snivelling little Health and Safety workers and slimy ambulance chasing lawyers.

6 thoughts on “On Health and Safety”