The UK is going to hell in a handcart.
We have more CCTV than any other country, a government intent on knowing what we say, who we say it to, when and why, illegal imprisonment under the guise of terrorism and innocent people being dragged from their homes and interrogated.
This is the woman heading the charge.

–And I put it to the honourable member, that I am an insufferable bitch.
This is Jacqui Smith, the Home Secretary, and the dilapidated, baggy eyed chimp behind her is Gordon Brown, our ‘Prime Minister’. (More like Prime Ateister! Am I right?) 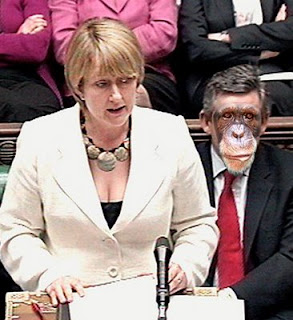 On top of all this, Smith’s latest idea is to monitor all our internet use, including email, downloading and social networking sites, like Facebook.
They’re saying it’s like with phone calls… They can see where the call originated and it’s destination but don’t know the content of the conversation but I call bullshit. How long before they’re essentially tapping all our online activity?
Of course they’re citing terrorism and pedophilia, as usual, but it will be average people who are basically innocent who will get screwed in the end. It always is.
They say it’s about big stuff but then you mention that you smoked a joint once to a friend online and before you know it the police are raiding your house at dawn claiming you’re a terrorist pedophile drug lord.

This guy admitted online that he sometimes lets his dog crap on the pavement.
You accidentally click the wrong link on a porn site, google something dodgy or download an MP3 and the police will be at your door.
Before you know it they will be spending so much time busting people who downloaded the latest chart topper illegally that the terrorists will slip by unnoticed.
We have less freedoms and more rules than most dictatorships and we now have a government controlled by people who consult experts and then ignore them completely!
It’s a slippery slope and the water at the bottom is full of fascist alligators. 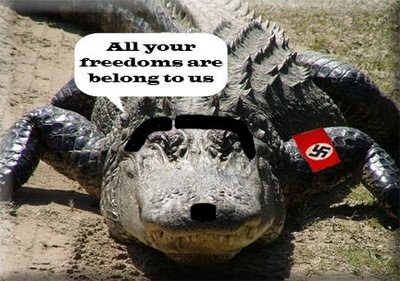 Well how would you photoshop a Fascist Alligator?!

Our freedoms are being reduced weekly and do you know what? It’s the Government that are the terrorists, now.
A terrorist is somebody who uses terror to further their own agenda and I think the current governments in the UK and USA fit that bill.
They use our terror of attack, youths, disease, whatever as a way to control us and keep us subordinate.
I’m not a conspiracy nut or anything but you don’t need to be in this day and age!
Plus, I really disagree with the government having info about me considering government officials loosing private and confidential data is now a monthly occurrence.
How many times recently have government workers left laptops, documents, CDs, flash drives, etc. on trains, in cabs, in the street? Too fucking many, because once is too many times. 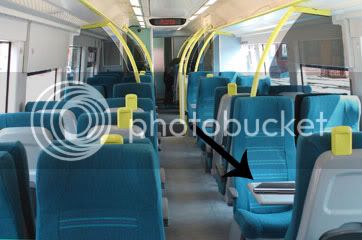 Pictured: Identity Thief’s wet dream.
Why, just the other day a leading government official, the most senior counter terrorism police officer in fact, Assistant Commissioner Bob Quick made a serious blunder when he was photographed getting out of a car on his way to a briefing with the PM, with a Top Secret document under his arm in plain view that detailed a list of places that would be subject to dawn anti-terror raids!

–They’ll never see these raids coming!
This piece of utter idiocy actually forced the government to go ahead with the raids the very next morning, rather than when originally planned and Quick, erm… quickly resigned (I’m sorry).

The worst part? We all just roll over and take it. We accept that every week or so the government comes up with another thing we cant do or another way to monitor the few things we can still do.
When they’re not doing that they’re raising taxes to pay for their second homes and rampant nepotism, usually under the guise of another pointless environmental band wagon or to further the ‘War On Terror’ but mostly the money is just used to fight the war against common sense.
So, be careful Jacqui Smith. You’re supposedly left wing, but this is where you’re heading: 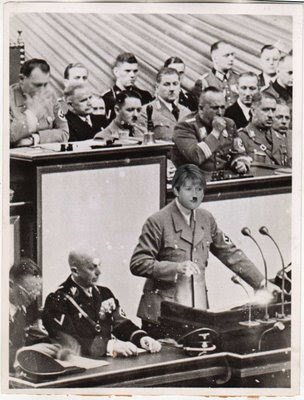 One thought on “Great Britain: A Fascist Democracy”