It all started when he was a young child. When he was no more than an infant he saw a large Tractor rolling down the lane outside his house. He was transfixed. Everything about the Tractor, from the huge wheels to the growl of the massive engine, excited Jim more than anything he’d known in his short life (and babies totally get excited about the dumbest shit).

His parents figured this obsessions with Tractors couldn’t really do any harm and it was nice seeing their child so excited about something so they encouraged it, figuring he would grow out of it sooner or later.

They decorated his room with Tractor wallpaper and carpets, bought him a Tractor lamp, bought him every tractor toy they could find. His father even custom built him a bed that looked like a Tractor.

When Jim hit 17, his tractor obsession was still very much alive and his dream was to study agriculture and mechanics with the aim of one day being a Tractor operator and repairman.

He worked hard all through college and University, putting in long hours and working part time at the local garage to garner both experience and money to put towards buying his own real-life Tractor.

Then finally, on his 21st Birthday, he put a down payment on a brand new FarmMaster 3000. 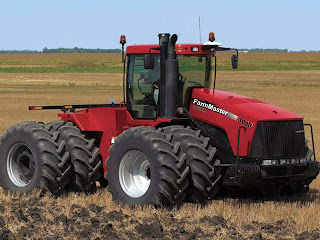 It was a majestic machine, capable of pulling all manner of farm equipment and moving huge loads.
He packed his Tractor centric belongings into the cab and, with a farewell to his parents, set off to pursue his dream.

After enquiring at several farms he eventually found one that was hiring. They snapped up his offer as their Tractor had just had a nasty run in with a herd of angry cows and was a little worse for wear so his FarmMaster and mechanic skills were invaluable.

For a while Jim was the happiest he had ever been. He was living his dream: Working on his Tractor by day; fixing the farmer’s ailing tractor by night.

Alas, the happiness couldn’t last. A year passed on the farm and things seemed to be going perfectly, until one fateful day.

The day started much like any other day. Jim got up early and went to check on Bessie (which his FarmMaster was now named). After doing the daily maintenance and hooking up the trailer to haul a load of Cattle Feed to the upper dairy fields, he set out to get on with his work.
As he was unloading the feed the herd of cattle began to act strangely towards Bessie the Tractor, mooing at it and stamping their feet. Too late did Jim realise that this was the same cattle who had ruined the Farmer’s other tractor many months before.

The biggest cow of them all started pawing the ground and snorting, eyes fixed on the Tractor. Before Jim could do anything to try and avert the imminent crisis, she charged, hitting the door of the Tractor with enough force to buckle it. The door swung open and she stuck her head straight in, pulling the hand-brake off with her long, prehensile tongue.

Straight away the Tractor started rolling away down the field. Jim went to run after it but was roughly yanked off his feet. A piece of metal jutting from the trailer had snagged his thick overalls and was now dragging him along behind the rapidly accelerating Runaway Tractor.

Jim could do nothing but yell warnings and try not to get too badly hurt as the tractor careened down the hillside, heading straight for the Farmer’s house. All he could see about him was cows. The whole heard was flanking the Tractor and bellowing, some even overtaking the out of control machine. Suddenly there was a searing pain in Jim’s head as it made contact with a large rock, protruding from the grass, and he was overcome by darkness.

As he opened his eyes it took him a minute to orientate himself. His eyes searched his surroundings, trying to digest the carnage that greeted them. Rubble was all that remained of the Farmer’s house, strewn here and there with bits of Cow.

With an effort he pulled himself to his feet. To his surprise, the tractor was still running, idling away on top of the remains of the Farmer’s house, although now when he looked at it he no longer saw a thing of beauty.

All his eyes saw, when he looked upon what he had previously though of as magnificent and beautiful, was a machine of carnage and death; a monster bent on destruction.

He ran from the farm, running as if pursued by Tractor Satan and all his Tractor Demons.

He ran and ran, he knew not for how long, until he collapsed from exhaustion.
He was woken by somebody gently shaking him and upon opening his eyes he saw it was his Mother.
He had unwittingly run to, and collapsed in front of, his childhood home which he had not been back to ever since the day he rode forth to start his new life.

For the next few days he lay in a deep fugue as he recovered from his injuries and the long run home. His Mother dutifully ministered to his needs, pouring water over his parched lips and pressing a damp cloth to his feverish brow.

Eventually he stirred and opened his eyes to see his Mother looking down on him. At first all he could focus on was her smile but after a few moments the rest of the room started to swim into view.
It was his room, as he had left it, only now all the toys, furniture and decorations he had treasured seemed sinister and evil. The very sight of a Tractor sent a chill straight to his bones.

Jim bolted from the room and refused to return until every single Tractor was disposed of. After that he became progressively reclusive, spending more and more time in his now very bare bedroom, rarely venturing into the outside world, until he ceased to go outside at all.
He spent day after day in the dark, haunted by visions of the carnage at The Farm.

His parents became more and more worried about their son. He was becoming almost hermit like: his hair long and unruly, his skin greasy and pale.
Eventually they decided something needed to be done and as soon as possible. They could no longer sit and watch their son, once so animated by life and passion, fade away.

They sent him to the best psychiatrist they could afford and, after many sessions and much leading, she managed to get him to relate the events from The Farm and set him on the path to dealing with them and putting them behind him.
“After all,” she said, “it wasn’t your fault! There was nothing you could have done.”

Jim came home that day a changed man. He felt alive again. He finally felt like he could move forward with his life.

He set out for a walk, his body still weak from so much neglect. He took it slow and didn’t pay much attention to his course. The sun was warm on his face and the light breeze brought him the scent of fresh cut grass.

Jim was snapped from his revelry by a scream. It was piercing and filled with terror. He looked in the direction he thought it came from and saw thick smoke billowing from a house down the road.

He ran to the scene and, looking up at the upper windows, saw a woman holding a small child. It was she that had screamed and he could see, from the way the flames licked from the windows on the ground floor, that she was well and truly trapped.

Thinking not of himself and only of saving the poor woman and her infant child he ran to the front door.
He opened the letter box, placed his mouth to the heated metal and proceeded to suck all the fire and smoke from the house.

With the Mother and child safe he collapsed onto the front lawn, coughing smoke and ash.
The Woman appeared at the front door, child in her arms, and rushed towards him, tears of joy streaming down her face.
She embraced him and thanked him over and over again.
“Thank you so much for saving me and my baby!” she effused through her tears, “But how did you do it?”

He looked her in the eye, cleared some ash from his throat and said:

Author’s Note: This is my second Shaggy Dog Story and I hope you enjoyed it. Find the first one here.