It has been proven time and time again that Prohibition does not work.

Yet for some reason it continues on, regardless.

The Alcohol Prohibition in America (1920-1933) basically created what we now think of as ‘Organised Crime’. Al Capone made a fortune, smuggling alcohol in to supply speakeasies which he owned.
The crime syndicates and structures put into place during Prohibition basically led to modern organised crime.

On top of that, it is really expensive! Not only is it a very expensive thing to Police but the Government also lost all the duty that was being paid on alcohol. The only people profiting were Criminals.

Nearly 100 years on, we’re still doing it. Prohibition is alive and well and happening around you as we speak, only now the target is drugs.

The UK Government is spending billions every year fighting a battle it can never win. The Drug Trade is like a Hydra. Every time the authorities catch a high level player, two more pop up to replace him.
But it isn’t the high level players that pay the highest prices.

The people Prohibition hurts the most are the Consumers. This is for a number of reasons:

2. Whilst drugs are illegal, the quality cannot be assured. The main reason people die from drugs is because a lot of drugs are produced by some smacked-out nutter in his kitchen, using whatever he has lying around. For example, the active ingredient in Ecstasy is a compound called MDMA. Tests in the UK have revealed that a hell of a lot of Ecstasy sold in the UK contains no MDMA at all. Instead, it’s often a combination of Cleaning agents and other chemicals. These cobbled together drugs often kill people.

3. A lot the profits from Drug Sales go straight into the coffers of Organised Crime. I’m not saying that a random hippy who grows dope in his garage is a Drug Lord, but when the gear is imported and distributed on mass, most of the money is going back into Organised Crime. This is especially true for Class A drugs, like Heroin and Crack Cocaine.
Rival Dealers will often have Turf Wars and similar. Innocent bystanders often get caught up in these Turf Wars and many people loose their lives, totally unnecessarily.

The only real way to deal with any of these things is Legalisation, and I mean full legalisation of every thing.

A lot of (stupid) people seem to believe that, if all drugs were legalised, the whole world would grind to a halt whilst everybody gets utterly fucked.

This. Is. Fucking. Stupid. Just think about it!

Alcohol is legal, yet people still seem to get into the Office, most days.

In all fairness, if I really wanted to I could probably get hold of Heroine. I think anybody could if they wanted to enough. Thing is, I don’t want to. I have no interest. I wouldn’t suddenly want to take arse loads of smack, just because it’s legal. Alcohol is legal yet I pretty much never drink because I don’t like not being in control of my body. Plus, I like to drive places so I can leave when I want to, which makes drinking a no-no.

None of this would change if drugs were legal.

However, if you do want to experiment (just like kids do with the booze and cigarettes), you know that what you’re taking is Government approved. Instead of having to buy it from a dodgy guy in an Underpass, you can walk into a head shop or chemist and buy it over the counter. For things like Heroine, which you usually take with a needle, a new hypodermic can be supplied with each sale or something, increasing the cleanliness of the needle and reducing the risk and spread of Hepatitis and AIDS.
It would also allow for more honest teaching in relation to drugs. At present, teachers lie through their teeth about a lot of drugs. The problem with lying about drugs is that when a kid then tries Marijuana and realises everything he was told is crap, he may assume they were lying about harder drugs. They often aren’t lying about these harder drugs but the trust is broken. How can the kid believe anything he was told about any drugs after that?

Of course, the Government don’t actually care about you, regardless of what they say, so we need to appeal to their mode of thought.

If all drugs are legal and controlled by the Government, they can be taxed.

The UK spends something like £5-6 billion a year on drugs. If that was taxed at just 5%, that’s £275 million a year and considering the current VAT rate in the UK is 20%, that’s £1.1 billion every single year, just in VAT! That’s before you even consider the Duty and Excise.

Add to that all the savings from not locking people up for bullshit possession charges and it spirals exponentially. It would essentially help eradicate national debt in a surprisingly short time. 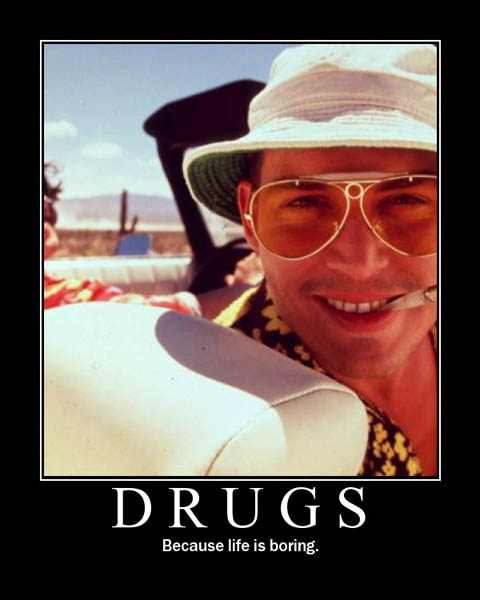