On my Freak of a Dog

My dog is a fucking nut job. She may look cute but she is an epic pain in the arse.
She is a very good dog, in all fairness… When it suits her, but she is far to intelligent for her own good. She knows more words than it is reasonable for a small dog to know and is apparently unconcerned by tone of voice. You get the same reaction if you use the usual ‘Who’s a good dog!!’ voice as if you whisper to her. She’s very clingy and can be exceedingly needy at times. She’s also ridiculously small – 9 inches tall, to the shoulder, and only 18 inches long!
This article will detail the main things that make my dog who she is. 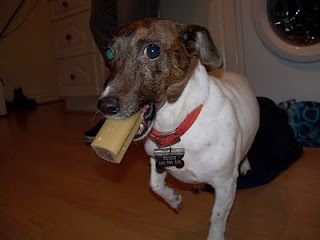 One of her most annoying little habits is hiding food fucking everywhere. We don’t know if it’s because she was the runt of the litter and maybe hid food to protect it from her sisters or if it’s because she has something against me.
You can see it all over her face, as well.
You give her a treat, such as the one pictured here, and her eyes start darting around the room looking for the perfect stash place. Instead of just leaving it on the carpet or, you know, eating it, she will take it and hide it somewhere, probably in some washing, so that by the time we find it, it’s gone through a wash cycle and has now become part of my jeans. 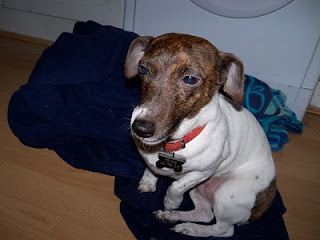 Look at that fucking face! She has being pathetic down to a fine art, including the sad ears and holding one paw up.
She uses this to great affect when she’s in trouble or when she wants something.
She also combines it with the slow walk when I wont give her a treat and want her to leave the kitchen, the belly crawl or the snuggle. Imagine trying to be angry with that pathetic specimen of the Canis lupus familiaris.
Trust me, it’s very difficult… No matter how much you want to strangle her. 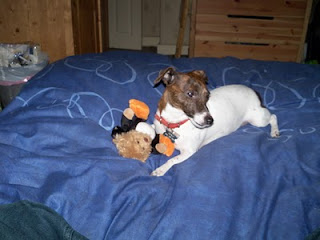 I guess most dogs like toys of some kind. With my dog her favourites are teddies.
Now, when I said she was clever, I wasn’t exaggerating. She knows her teddies by name and will bring you whichever you ask for, assuming she can find it. The one pictured is her absolute favourite. It’s called Bearguin because it’s a bear wearing a penguin suit, for some reason.
Bit of a weird name, but she learnt it in about half an hour. She knows the difference between balls, teddies and toys (dog toys, like ropes, etc.) and if you put them all in a pile she will bring you whichever you ask for.
#4 – Staring out of the window 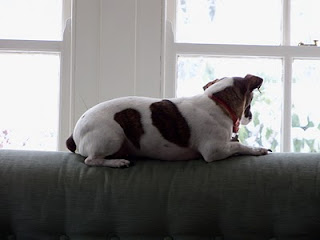 Her absolute favourite thing to do is stare out of the window. At nothing. In the picture she’s staring into an empty garden but usually it’s the empty street we live on that she stares at.
Wherever we go she finds a window and if there isn’t one she can look out of she reverts to #2 until you pick her up so she can see nothing’s going on.
This need to know what’s happening outside causes her to act like a Grade A Moron. She will hear a noise, like a cat farting 3 streets over, and hurl herself towards the window, often jumping straight into the side of the armchair on the way.

By christ does my dog like a blanket! When she’s tired herself out being a pain in the arse, she likes nothing better than to curl up under a blanket. As you can see from the pic, she also likes getting inside the duvet. This resulted in us being woken up at 4 am one morning because she’d gone inside the duvet and then got caught between two buttons on the way out and was thoroughly wedged. We don’t know how long she’d been stuck there but she was hanging off the side of the bed, growling and not at all happy! We now have to keep them unbuttoned as this minor incident did not stop her climbing in there and we’d rather get sleep! I bought my better half a Doggie IQ Test as a joke-y stocking present one Christmas and one of the tests was to throw a blanket over the dog and see how long it took the dog to get out from under it. We never actually tested her IQ but I suspect she would have gone to sleep when we threw the blanket over her. 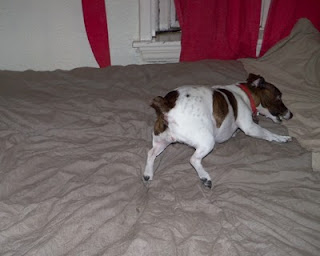 Not only is she a giddy, little ball of energy but she insists on being at her giddiest at the most inappropriate times, such as bed time. For some reason, my dog sees getting in bed as some sort of sign that now is the time to grab a teddy and start running around like a fucking lunatic.
She gets over excited and you have to open the bedroom door so she can run up and down the tiny space between the upper rooms of our tiny house, which would be fine if she didn’t make so much noise with her running. It’s not that she barks, she’s just heavy footed for a creature who only weighs about 6.5 lbs. 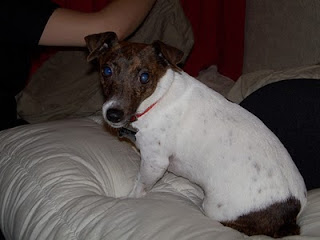 My dog is the quietest dog I have ever known. It’s actually quite unnerving. It’s not that she can’t make sound, she just doesn’t. She will occasionally squeak when she’s very excited or growl when you’re playing tug-of-war with her but she doesn’t, for instance, bark at people who come to the door. She runs up and down from window to door and gets all worked up… but doesn’t make any noise. She’s like the Michael Myers of dogs, but without the vicious murder (unless you’re a teddy). When she’s with my Mum and Dad’s dogs (who bark like it’s going out of fashion) she will occasionally bark along with them but she almost never does otherwise. It’s one of those weird things you notice every so often, and when you do it always seems weird.

These are some other pics I wanted to use in this article but didn’t have space for.

As you may have guessed, I take a lot of pictures of my dog.

If you want to tell me about your dog, please  use the comments section. I never get bored of talking about dogs and the weird shit they get up to.