Zero to Panic: My brain is a dick.

I am a panicker. There is a very real chance that I am either insane or the subject of a life-long hate campaign by my brain and this means my brain likes to fuck with me as much as possible.
Over the 20+ year relationship I’ve had with my mutinous grey matter it has learnt that the best way to really screw up my day is to suggest to my rather hyperactive imagination that something bad has happened/is happening/is about to happen.

Example: Girlfriend was supposed to finish work half an hour ago. She said she may be late out tonight but has yet to text me.

Normal Person: “I’m sure she’s just busy at work and will be out soon.”

Me: “SHE’S BEEN KIDNAPPED AND RAPED BY MONSTERS!!”

As retarded as that seems, try telling that to my imagination. You need to imagine that my imagination is a slightly retarded child with ADHD who’s just eaten 5 party bags of Haribo and now has an epic sugar rush. Now show that child a bouncy castle and what will ensue is an unstoppable whirlwind of child followed by a torrent of vomit. This is my imagination. If you don’t like that analogy then maybe a Jack Russell on meth let loose in a cattery is more your cup of tea.

My imagination is out of control is what I’m saying.

This manifests itself in all sorts of fun paranoia and delusion, ranging from a deeply held belief that the dark conceals untold evils to the certainty that this will be the time that the dog trips up my fiancée and she falls face first into the deep fat fryer.
It’d be easier if my brain just stopped at telling me these things but it instead likes to furnish me with horrifically graphic mental images.
Blame it on a life spent reading far too much Stephen King and Clive Barker, if you like, but I’ve always been like this.

I also have a fairly crippling irrational fear of ghosts. It’s not that the idea of ghosts scares me, as such. I have a conviction that if I ever saw a ghost I would instantly drop dead from a massive coronary. This means I’m terrified of seeing one, because I will die. It does not matter that this is stupid, that’s why they call it an irrational fear. 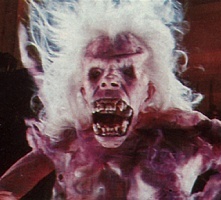 Capitalising on this, one of my brains absolute favourite tricks is waiting till I’m in bed, eyes closed and attempting to sleep. It then suggests to me that, should I open my eyes, there will be an horrific spectre looking right into my face. This is obviously stupid but that is irrelevant. It then wakes up my imagination and has it draw me up a detailed picture of this hideous spectre. I now have two choices… Open my eyes and look into the (non-existent) maw of this (fictitious) spectre or keep my eyes closed and allow my brain to continue its shenanigans. The former is obviously the better choice as it will prove there is no such spectre but my brain keeps saying, “Yeah, but what if there is?”

I always end up opening my eyes and there is never anything there but that doesn’t make it any better the next time!

I am also a serious pessimist. My insubordinate brain will always jump for the worse case scenario. As in the example at the beginning, tiny things will send my brain into a paroxysm of over-reaction.
There is absolutely no way for me to stop it so I have become quite adept at hiding my lunacy. Although my brain is rushing to tell me all the possible ways my Fiancée could be horrible maimed or injured whilst cooking a meal I can usually stop it from showing on my face. Usually. She is rather intuitive and does know me very well, so she will often ask, “Are you freaking out?” at which point I have to explain to her why without it coming out as, “jibberithinkyouregoingtofallinthefryerandknockthatpanofwateronthedogjibber!!”

To be honest, I’m often amazed I can even function as a productive member of society. By rights, I should be curled up in the fetal position in a corner somewhere, alternating between crying and raving.