OK, I’m going to say this now and get it out of the way: Obesity is NOT a disease.
It isn’t! Endlessly stuffing pies into your face is not a disease!

NOT a disease!
It’s an addiction. An addiction to having a mouth full of cake.
But say you actually believe it IS a disease… They class alcoholism as a disease, even tho that is also an addiction so by that logic, Smoking is a disease. 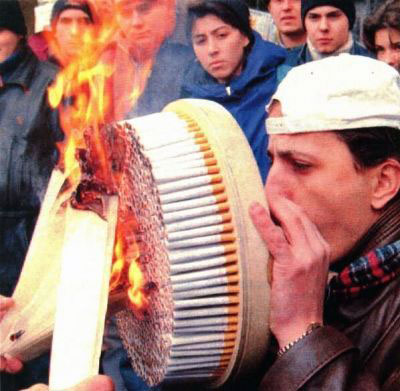 Poor guy! He’s got Smokesity.
As a smoker I am getting fucking sick of people giving me shit and looking down on me! I’m getting fucking sick of having my civil rights violated so that some uppity prick can be smug about how he got smoking banned in pubs. IN FUCKING PUBS!! Since man figured out he could turn plants into things that he can smoke and drink he has wanted to do the two together. It’s the natural way!

How it should be!

Smokers in the UK pay over £16 billion a year on tax and duty on their fags and the NHS only spends around £2-3 billion a year treating smoking related illness. That’s a net profit for the government of over £13 billion a year! Plus, a high percentage of smokers die before they start collecting a pension so more profit for the Government there. Yet they act like they want us to stop smoking! They ban it in all indoor areas, they promote the attitude that smokers are somehow sub-human and can be snubbed and spurned by all non-smokers. They run TV ads telling me how smoking is killing me and everyone I love, my cigarette packets now have pictures on them of throat cancer and diseased lungs and to be honest I am sick to my (slightly yellowed) back teeth.
I already know the health risks of smoking. I have known them since I was a small child. Honestly, who doesn’t know the risks? I think it’s totally unfair that I be made to feel bad about smoking when I am paying a lot of money for the privilege and a 300 pound 18 year old can walk into any supermarket and buy value bacon, guilt free. His fat arse and all his like cost the NHS over £6 billion a year!

So, in the interest of fairness I think they need to start putting warnings on bacon and such like, in a similar style to the kind of warnings they feel it’s appropriate to put on my fags.

It’s only fair!
If I want to smoke KNOWING FULL WELL that it’s bad for me, then that’s my damn business. I can only smoke outside or in my home so if I’m out having a fag and you sidle over to me and start doing that fucking irritating little cough, don’t be surprised if I punch you in the face. I’m learning karate, don’t ya know, and there’s only so much hassle a smoker can take before he snaps.

In closing, I would like to leave you with this thought for the day…