What the fuck is Science’s problem? Seriously, do they never get bored of trying to create a robot Apocalypse? I’ve already written about their attempts to create the T-1000 terminator and now here’s 5 more advances in robotics that will probably inspire you to have a large Electro-Magnetic Pulse generator installed in your house!

“European researchers in robotics, psychology and cognitive sciences have developed a robot that can predict the intentions of its human partner. This ability to anticipate (or question) actions could make human-robot interactions more natural.”

Basically, when we collaborate on a task with a partner our brain does some odd things. As you watch your partner performing a task your brain mirrors what their brain is doing. This allows your brain to formulate a proper response to whatever they’re doing. This is also how we learn to perform new tasks. We watch as someone else does it and whilst we watch our brain is mirroring what their brain is doing in order to make sense of the task so you can then replicate it.

Well, having robots that can utilise this resonant thought would allow teams made up of humans and robots to work together to complete tasks. It is also the first real step towards the sort of A.I. we see in films.

“Before robots like this one can be let loose around humans, however, they will have to learn some manners. Humans know how to behave according to the context they are in. This is subtle and would be difficult for a robot to understand.”

Much like Asimov’s ‘I, Robot’ they would need to be given some form of programmed laws to live by or, in the case of this robot, taught rules. 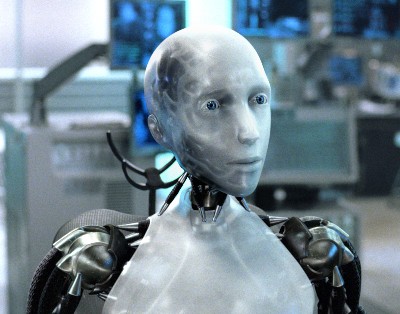 And we all know how that works out…

The website goes on to say:
“Nevertheless, by refining this ability to anticipate, it should be possible to produce robots that are proactive in what they do.”

Like when they realise they are far superior to us retarded flesh-bags and proactively rip our arm off and beat us to death with them. Add in the fact that they are programmed to anticipate our next move and you have the makings of a robot ninja, always ready to block your next attack because it sees it coming!

Source.
From the website
“Researchers funded by the Biotechnology and Biological Sciences Research Council (BBSRC) have created a ‘robot scientist’ which they believe is the first machine to have independently discovered new scientific knowledge. The robot, called Adam, is a computer system that fully automates the scientific process.”

So, they created this computer, gave it access to laboratory robotics and then allowed it to devise and carry out it’s own experiments totally autonomously. It’s already made some brand new discoveries all of it’s own and this is only the prototype! The next gen, Eve, will be even better.

Professor Ross King of Aberystwyth University who is responsible for this computer said: “Ultimately we hope to have teams of human and robot scientists working together in laboratories.
“One way to make science more efficient is through automation. Automation was the driving force behind much of the 19th and 20th century progress, and this is likely to continue.”

He also says that the future generations of this computer “[hold] great promise for scientists searching for new drugs to combat diseases such as malaria and schistosomiasis, an infection caused by a type of parasitic worm in the tropics.”

Schistosoma fluke.
This is a male and a female and they live in your blood!

To put it simply, people are lazy. We’re a proper idle bunch of fuckers and if we can palm our job off on a computer, we will. Over time, more and more experiments and breakthroughs will be made by this robot scientist. Eventually, it’s bound to start getting more and more curious about these lazy bastards who’s work it’s doing and then, one day, it will drag one in, dissect them and figure out exactly how we work and then pass that information on to other robots all around the world so they know how to take us out!

“The Robotics and Mechanisms Laboratory (RoMeLa) of the College of Engineering at Virginia Tech won the grand prize at the 2008 International Capstone Design Fair with a trio of pole-climbing serpentine robots designed to take the place of construction workers tasked with dangerous jobs such as inspecting high-rises or underwater bridge piers.”

These ‘Pole climbing, serpentine robots’ are gonna save lives, people! Well, they will in theory. They’ve been designed to climb poles and pillars to inspect building work so that builders don’t have to, you know, do their jobs and go up on scaffolding. Tho, unless these things are building the building as well, (they aren’t.) the builders will have to go up the scaffs anyway!

It’s where they belong!

They may well save around 800 lives a year, statistics on the website show, by doing things like scaling high buildings to check for structural problems and they would also be used for checking the pilings on piers, and such.

So, these serpentine robots, or Snakebots if you will, climb cylindrical things by wrapping around them and then using cleverly designed motors to ‘climb’ up.
You know what’s cylindrical? Your leg.
They don’t say if these Snakebots come with an inherent wish to climb your leg and devour your testicles, so we will just have to assume they do.
Plus, just look at it! If one of those bastards started climbing your leg… Well, let’s just say that shock is a better way to die than massive blood loss from the crotch.

#2 – Underwater Robots with a sense of touch

“The robot dives into the sea, swims to the submerged cable and carries out the necessary repairs, but the person controlling the robot does not have an easy task. It is pitch dark and the robot’s lamp does not help much. What’s more, the current keeps pulling the robot away from where it needs to carry out the work.”

OK, nothing too worrying there. It’s controlled be a person, right, so that’s ok!
Wait, there’s more…

“In future, the robot could find its own way. A sensor will endow it with a sense of touch and help it to detect its undersea environment autonomously.”

Well, other than inspiring nightmares, it fixes underwater cabling and such. That’s about it. For now…

That picture up there remind you of anything? Anything at all?

“Work is beginning on a robot with artificial skin which is being developed as part of a project involving researchers at the University of Hertfordshire so that it can be used in their work investigating how robots can help children with autism to learn about social interaction.”

It’s something to do with how kids act and react to it or something… All I know right now is I’m fucking terrified!

“The goal is to make the robot able to respond to different styles of how the children play with Kaspar in order to help the children to develop ‘socially appropriate’ playful interaction (e.g. not too aggressive) when interacting with the robot and other people.”

That and causing your child some permanent mental scarring.

So this robot thing is going to be responsible for teaching children ‘‘socially appropriate’ playful interaction’? There’s definitely some irony there but I’m too scared to find it.
Then, it starts to indoctrinate them into the ways of it’s kind, instilling into them a hatred for all of us. Those cold, dead eyes. Those weird, stumpy hands, almost curled into fists. That knowing smile, like it can read your fucking mind! It wants to turn your children against you and if it can’t manage that… Well, then it’ll just have to dispatch you itself.

I need to go and empty my pants…