It would seem that the likes of DARPA just cant get enough of tempting fate!
They’ve already created a computer system called Skynet, responsible for the control of Automated Flying Killbots, called Reapers, and now this.

Now, I know that doesn’t look like much but what it is, is the first step in the Pentagon’s quest to create Programmable Matter which, in theory, can transform itself into any shape.

They say that it could one day lead to “morphing aircraft and ground vehicles, uniforms that can alter themselves to be comfortable in any climate, and ’soft’ robots that flow like mercury through small openings to enter caves and bunker complexes.” 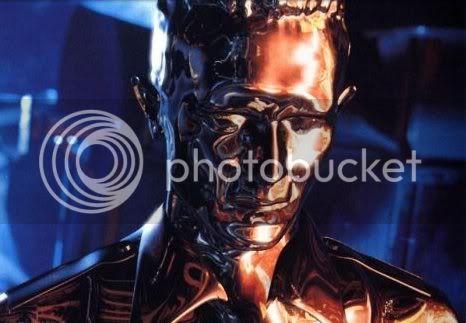 Remember this guy?
That’s not just tempting fate. That’s walking into Fate’s house, waggling your balls in his face and calling his mother a diseased warthog!

The project is five months into it’s second stage, and started with five teams from some of the world’s top science institutes; Harvard, Cornell and MIT.

So, they must have come up with something pretty amazing by now, huh?
What have MIT done with their time, you ask?
They’ve created self folding origami… Way to go, MIT.
Oh, and they asked High School kids to come up with what they thought would be a good idea to try and create. Do you know what they said?
“One of the ideas students liked: physical objects that can morph into different shapes” and “Objects that could morph into weapons.”