This is Yellowstone National Park
As you may or may not know, underneath Yellowstone there lies a Behemoth just biding it’s time, waiting to totally fuck up your day.
I am talking, of course, about the Yellowstone Supervolcano. One of the biggest in the world, it’s magma chamber is thought to be roughly 34 miles wide and 45 miles long.
It’s last major eruption was 640,000 years ago during which it threw around 240 miles3 of ash and rock into the air, creating a caldera roughly 1km deep and 52 by 28 miles in area. It is so gratuitously humongous that it was only fully confirmed when viewed from space! 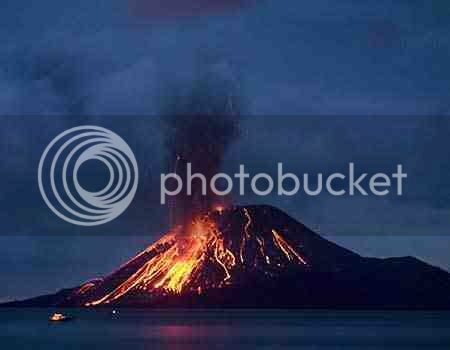 This eruption occurred in 2007.

It has been postulated that an eruption of Krakatoa in 535 AD could have been responsible for a global climate change due to ash and water vapour being thrown into the stratosphere. It is thought that this may have caused a Nuclear Winter across much of the globe.

Therefore, it is totally within the realms of reality that a massive and catastrophic eruption at Yellowstone could end the world as we know it. If enough ash and vapour was forced into the Stratosphere it would block out the sun leading to a possible Ice Age and the mass extinction of pretty much everything, as no sun means no plants, famine and outbreaks of disease. It could also cause world wide weather phenomena such as earthquakes, hurricanes and tsunamis. Some scientists even believe that it was a volcanic eruption of this magnitude that caused Dinosaurs to go extinct.

Plus, humans being how we are you can expect looting and riots worldwide.
Except in this area:

Know why no-one will be looting here? Because this chunk of America will be pretty much totally destroyed.

If you live in this area, might I suggest a move tothe UK? It’s always cold and dark here anyway, so it’ll help you adjust.
If you live anywhere else, buy yourself a rifle, start stockpiling Spam, jerky and Dehydrated water (wait… what?), huddle close with your loved ones for warmth and pray for spring.