5 ‘Dinosaurs’ that are still alive and kickin

It is a commonly held belief that Dinosaurs died out around 65 Million years ago. This belief is wrong. OK, I’ll grant you that T-Rex is no longer roaming the plains and there isn’t likely to be a Dipolodocus eating your hedges when you get home, but I assure you that there are still plenty of ‘Dinosaurs’ about. 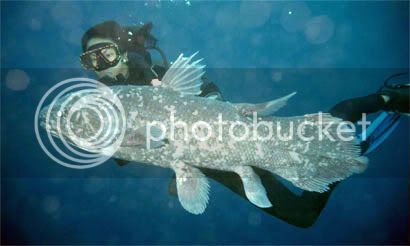 Thought to have died out 80 Million years ago , it was discovered to still be very much alive in 1938 when one was found off the coast of South Africa. It turned out that fisherman had caught many but threw them back as their oily, foul tasting skin had no commercial value.
The Coelacanth is essentially unchanged from the fossilised specimens from 80 million years ago.

This ugly little thing that looks like a mole shagged a toad is a Purple Frog, found in the Seychelles, off the coast of India. It can be traced back around 100 Million years through fossil evidence. The reason it was thought to be extinct for so long is that it spends around 50 weeks a year underground, only surfacing during monsoon season for mating. Unlike other burrowing frogs that surface for food, this little guy uses his tongue to eat termites and such whilst underground.

Thought to have evolved around 570-248 million years ago, the horseshoe crab is actually a relative of the Spider, though a distant one. It is the last member of the Xiphosura, one of the oldest classes of marine arthropods.
The Horseshoe Crab is very, very weird in a number of ways.
First off, it has no mandibles. Instead, it’s mouth is located in the middle of the underneath of it’s body, between it’s 5 pairs of legs, each of which is equipped with a set of gills which allow it to breath in water and on land for short periods if it’s gills are kept moist. It has two compound eyes, 5 other simple eyes in varying locations (thought to be important during embryonic stages) and blue blood. The blood is blue as it is copper based, rather than iron, like many molluscs.
It also has the ability to re-grow lost limbs.

This is the general classification for the Crocodile, Alligator, Gharial and Caiman famillies.

Obviously, the things on this list so far weren’t really ‘Dinosaurs’ in the true sense of the word, but this certainly is. Dinosaur means Terrible Lizard and, I think we can all agree, the Crocodile fits the bill. Crocodilians first appeared around 220 million years ago, but the Crocodilians we know today evolved around 84 million years ago.
The sheer power of these creatures is astounding! Only about 7 of the species are considered dangerous to humans but they’re the 7 biggest. The ones that grow over 3 meters long! They can grow to up to 6 meters long (20 ft) or about the length of a truck.
A 6 meter crocodile can lie in a foot of water and be totally invisible. They have a bite force in excess of 5,000 pounds per square inch (2.5 tons) coming down on 60-80 teeth up to 13 cm (5 inches) long. And don’t think you’ll be safe on land, either. The land speed record for a croc is 11 Mph (17 km/h) and they can propel themselves out of the water to attack.

Like this with the ability to jump 10 feet straight up from standing… Yeah.

Oh and once they get hold of you they will pull you back into the water and drown you.

There are some weird evolutionary dead ends up there but nothing does weird quite like sharks. Sharks have been evolving for about 420 million years, with modern sharks going back about 100 million.
Sharks, Rays and Skates all evolved from a common ancestor and when they split into the separate species is not known with any degree of accuracy. They are cartilaginous fish, meaning their skeletons are made from cartilage.
Sharks come in many, many, many shapes and sizes but here are some of the weirdest Google could come up with: 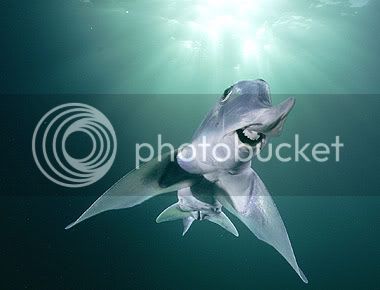 Screaming PHOTOSHOP at them will not make them go away…

Clockwise from the top left they are the Megamouth Shark, Prickly Shark, Elephant Shark, Goblin Shark, Frill Shark and Shark Ray and these are but a few. Sharks range from a few inches (Dwarf Lantern Shark) to over 12 meters in length (Whale Shark).
Out of over 360 species only 4 have been involved in a significant number of attacks on humans. These are the Great White, Tiger, Bull and Oceanic White Tip. The Bull Shark is one of the most dangerous as they can tolerate both marine and fresh water environments, meaning they can swim up rivers and they have even been known to chase prey onto beaches.

Is it… Is it smiling at me?

Sharks usually have two or three working rows of teeth with roughly 20 to 30 teeth in each row (a whale shark has 300 per row) which are constantly replaced should they be damaged or fall out and a shark can go through up to 35,000 teeth in it’s lifetime. I personally own a 30 Million year old sharks tooth, found in Morocco, and it still has an edge on it.

They can fucking jump as well!

Should you ever come face to face with an aggressive shark the best thing to do is make yourself seem like a credible threat. Punch, kick and scratch it, aiming for the eyes, gills and snout. Always keep an eye on it because it is likely it will try and retreat and sneak up on you. Outright retreat is futile as you will never out swim a shark so the best bet is to move towards your boat/the shore quickly and calmly whilst keeping an eye on the toothy bastard.